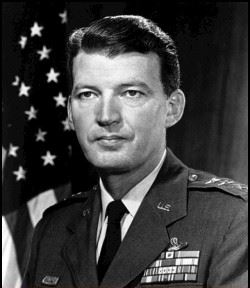 Bernard Adolph Schriever, commander of Air Force Systems Command, was born in Bremen, Germany, in 1910. The architect of the Air Force’s ballistic missile and military space program, he came to America in 1917 when his parents emigrated from Germany. He became a naturalized citizen in 1923, attended grade and high school at San Antonio, Texas, and graduated from Texas A&M in 1931 with a bachelor of science degree.

He was commissioned in the Field Artillery but in July 1932 began flight training at Randolph Field and earned his wings and commission in the Air Corps in June 1933 at Kelly Field. He was assigned as a bomber pilot at March and Hamilton fields, Calif., with promotion in June 1933 to first lieutenant.

He went to Panama for duty at Albrook Field and in September 1937 left the Air Corps to fly as a pilot with Northwest Airlines. He returned to duty in October 1938 with the 7th Bomb Group at Hamilton and a year later became a test pilot at Wright Field, where he also attended the Air Corps Engineering School, graduating in July 1941. He then took an advanced course in aeronautical engineering at Stanford University, was promoted to captain in April 1942, and got his master’s degree in June as a newly promoted major.

In July Schriever went to the Pacific for combat with the 19th Bomb Group, taking part in the Bismarck Archipelago, Leyte, Luzon, Papua, North Solomon, South Philippine and Ryukyu campaigns. In January 1943 he moved to the 5th Air Force Service Command in maintenance and engineering assignments, and as chief of staff, finally becoming commanding officer of advanced headquarters for the Far East Air Service Command which supported theater operations from bases in Hollandia, New Guinea, Leyte, Manila and Okinawa.

He was promoted to lieutenant colonel in August 1943 and to colonel that December. After the war Schriever went to Headquarters Army Air Forces as chief of scientific liaison in materiel for three and a half years. He graduated from the National War College in June 1950 and returned to Headquarters Army Air Forces as assistant for evaluation, in development. In January 1951 he continued the same type of work with the title of assistant for development planning and was promoted to brigadier general in June 1953.

Schriever began his long association with ARDC – now AFSC – in June 1954 as assistant to the commander. The next month he headed a small group of officers who went to Los Angeles to organize and form what has since become the Air Force’s ballistic and systems divisions under AFSC with the end product such ballistic missiles as Thor, Atlas, Titan and Minuteman, and all the aerospace systems which have been launched into orbit, including support for NASA in its Mercury man-in-space and other programs.

Schriever was promoted to two-star rank in December 1955. He left Los Angeles for Andrews Air Force Base, Md. in April 1959 as commander of ARDC, which became AFSC April 1, 1961, under a reorganization initiated by him. He was promoted to lieutenant general on that date, April 25, 1959, and to full general on July 1, 1961.